A PINCHGUT OPERA PRODUCTION
IN PARTNERSHIP WITH AUSTRALIAN THEATRE LIVE

“Platée is yet another outstanding success from this visionary team.”
Deborah Jones, Limelight Magazine

BEHIND THE SCENES | PLATÉE 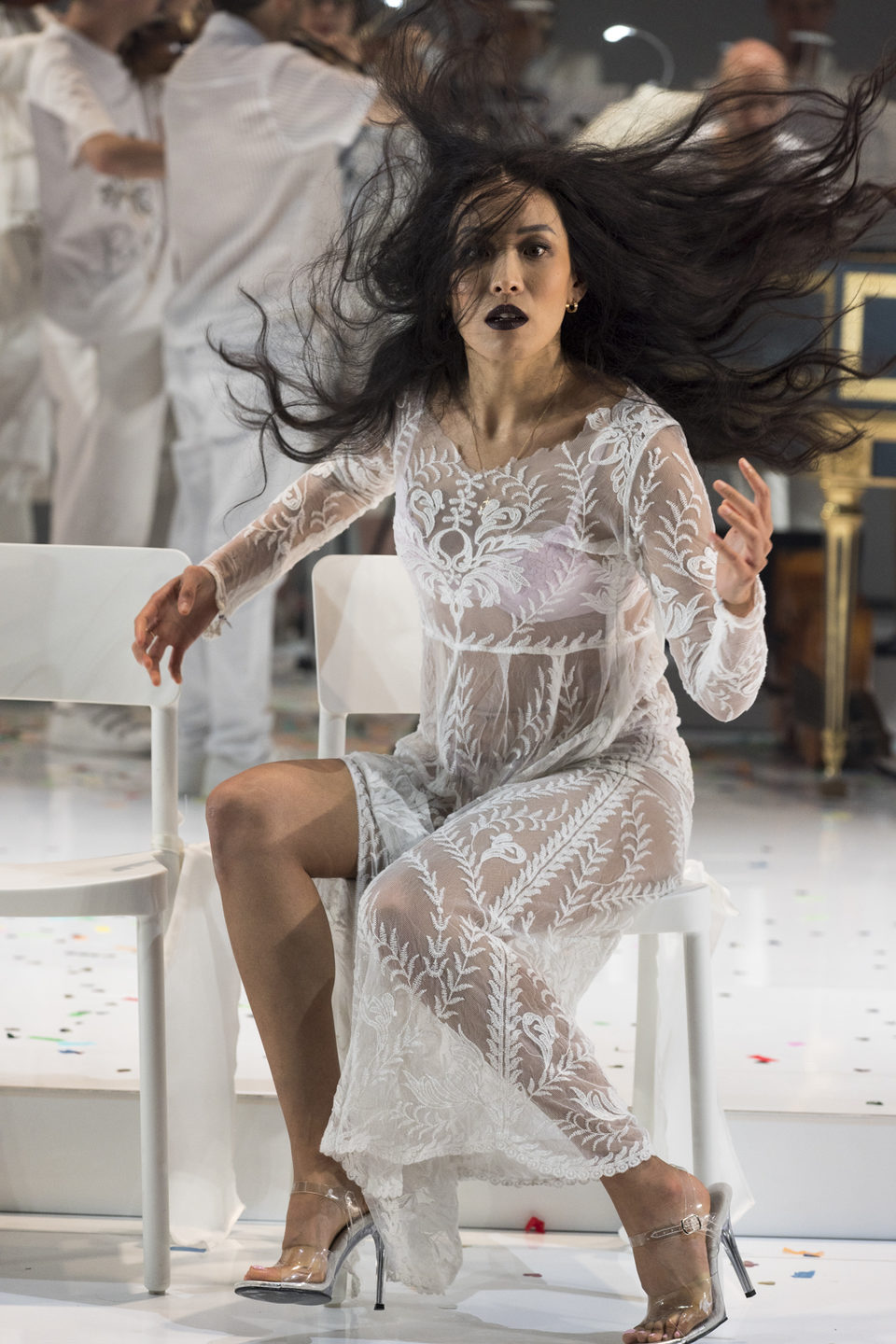 When asked by Erin to direct Platée some years ago – well before the words “global pandemic” became the most oft-repeated phrase across the international airwaves – I agreed partly because I love Pinchgut, partly because it was such a long way off, but mostly because I knew the work would take me so far out of my comfort zone that it must be good for me.

A work that begins post-orgy, with the characters hungover, picking themselves up and dusting themselves off in order to create a new kind of theatre, is a pretty challenging and thrilling premise!

As always, in the beginning of the process it’s the designer who does the heavy lifting, and Stephen Curtis (2021 marking the 40th year of our collaboration) suggested our world: a wedding celebration that has, if you like, gone feral.

Placing our story on the stage of the City Recital Hall means we are thrown back onto our own invention to supply the visual spectacle that Rameau was assuming would come with the theatres, in Paris and Versailles, for which he was writing. It’s been a pleasure, across the weeks of rehearsal, testing the limits of that invention.

Most of all, we knew we wanted to place Erin and the orchestra at the heart of the production, so they assume the central position on our stage: the focus of the glorious acoustic of this wonderful hall.

But more than anything else, and the reason the work has endured as Rameau’s masterpiece, is the extraordinary creation at its centre – part pantomime dame, part deluded Cleopatra – the Queen of the Swamp, Platée. You do not attempt this work unless you have a performer who can meet her challenge: Kanen Breen is the reason we are doing Platée.

Like Malvolio in Shakespeare’s Twelfth Night, she resides in what I call ‘the comedy gap’ – the space between self-image and the image the world sees. Like Malvolio, there is delight in every entrance, every nuance of self-delusion. And, like Malvolio, there is a cruelty ultimately in a device that goes too far. Unlike Twelfth Night, however, in Platée Rameau manages, in one single, brilliant stroke, to turn the opera on its head and reverse its hilarity – in this world whose ruling deity is Madness (or Chaos – “Folly” is too polite a translation of La Folie) we choke on our own laughter. 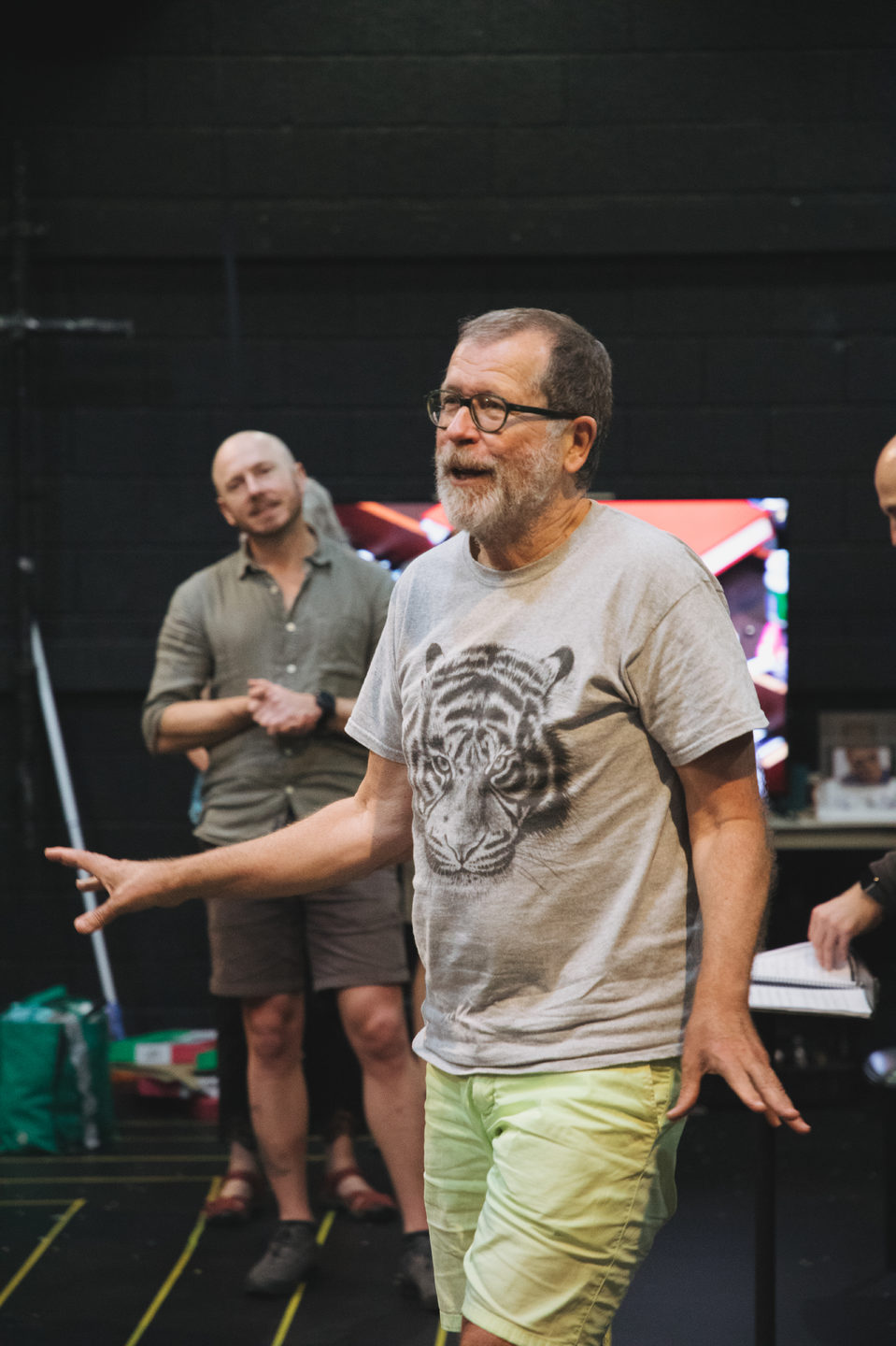 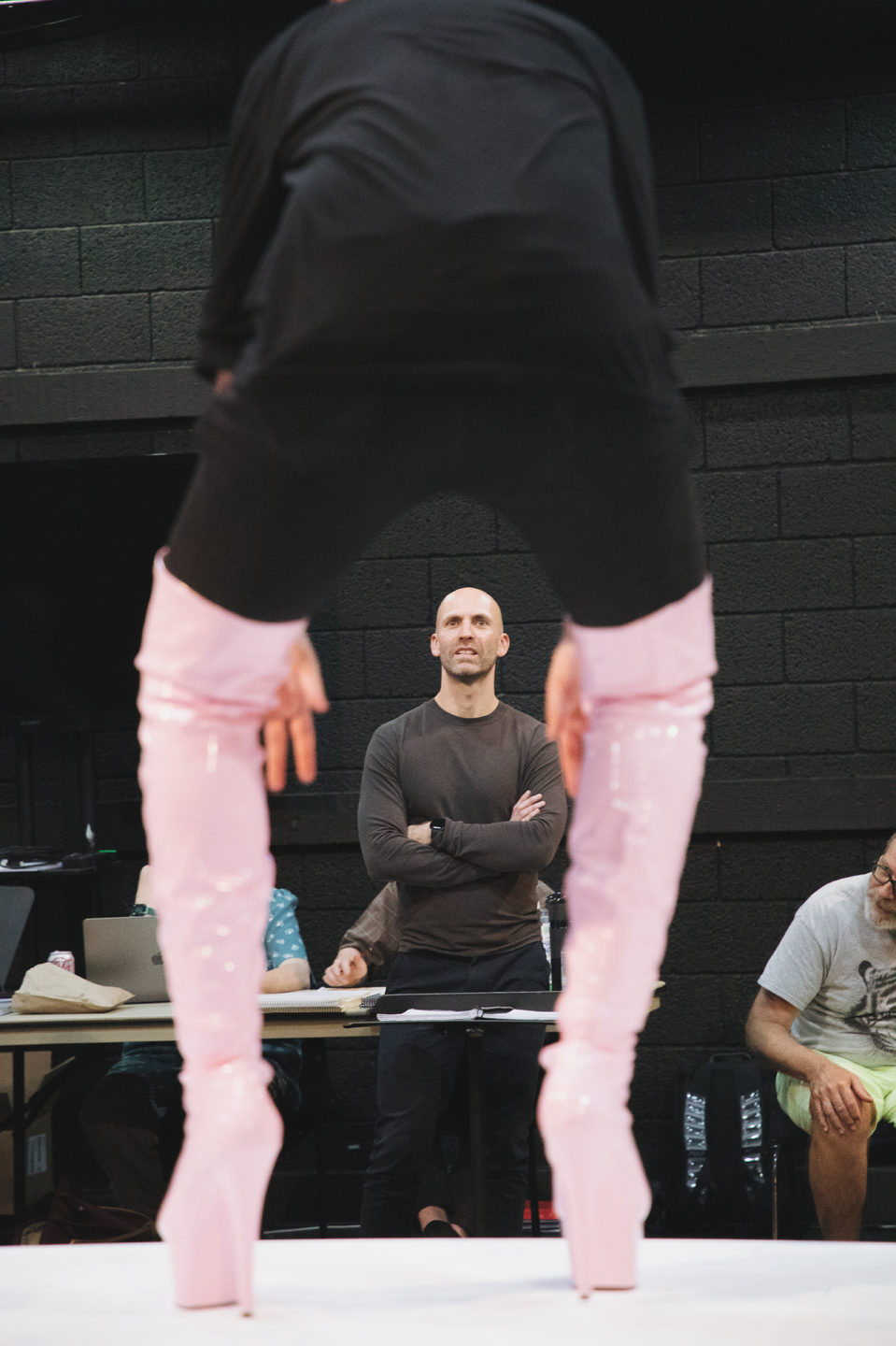 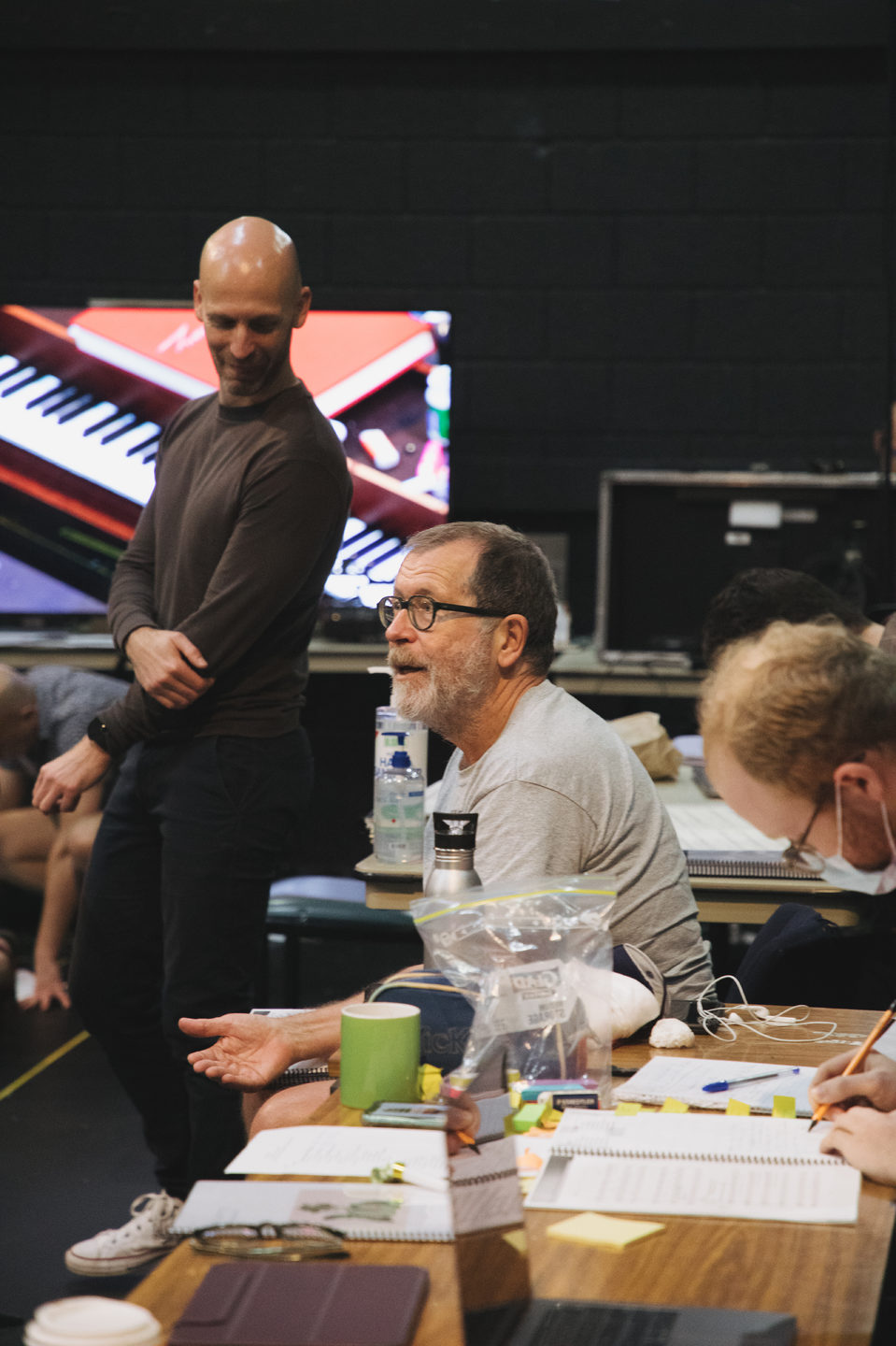 “Formons un spectacle nouveau” (Let us create a new entertainment) sings the chorus in the prologue to Rameau’s Platée.

Ostensibly they are referring to the allegorical birth of comedy itself. Thespis (the inventor of comedy) plans with L’Amour (Cupid), Momus (the god of ridicule) and Thalie (the muse of comedy) to expose and satirise the frailties and faults of both the mortals and the gods. But this “spectacle nouveau” was also something else completely: the birth of a comic opera every bit as sophisticated and sublime as the epic tragedies that dominated the French stage at the time. A contemporary observed that “Platée will remain without a rival as it is without a model”. Platée was unique and original. And as such it utterly divided audiences.

Platée was first presented at Versailles in 1745 as part of the court’s wedding festivities for the dauphin. Many in the audience were completely shocked by Autreau and Rameau’s extreme departure
from tradition. Here was a tragédie en musique in drag. It had all the characteristics of a serious French opera (a prologue, three acts with the traditional divertissements or dance sequences, and a plot taken from ancient mythology), but everything was subverted. The heroic tenor was playing a female nymph, the leading soprano was playing Madness (La Folie), and the Graces – usually depicted as quite literally graceful and elegant – “cavorted lewdly”, noted an aristocrat in the audience.

Voltaire – who was nursing the hangover of a fractious relationship with Rameau – was in the audience at that Versailles performance. He hated it. “You didn’t miss much except a large crowd and a very bad work,” he wrote to his niece, “it is the height of indecency, boredom, and impertinence.” But the large crowds of courtiers were the first evidence of its enormous popular appeal.

After its controversial premiere at Versailles, Platée moved to that veritable temple of French music, the Académie royale de musique in Paris or, as it was more simply known, the Opéra. Here again
it divided the opinions of the connoisseurs but took in enormous box office receipts. If its humour did not meet the approval of its sniffy and snobbish critics, who thought it beneath the dignity of the court and the Opéra, it did match the tastes of the audience, as the Baron d’Holbach observed.

Some thought the words were indecent and unworthy of the sublime traditions of French opera, but that Rameau’s music was very fine. The dramatist Charles Collé wrote: “I admit that the music is very pretty, but it is dishonourable for our nation that works as execrable [as this one] are performed in public.” Rameau’s supporters claimed that Platée was “the most original, the most beautiful, and the strongest piece of music that he has written”. Even Rousseau, who was generally critical of Rameau, thought that Platée was the “best musical play ever to be heard in our theatres”.

Platée is full of 18th-century in-jokes. It was produced at the height of the debates about the relative attributes of Italian and French opera. Rameau satirises the debate by theatricalising what were considered to be the worst excesses of both forms. On the Italian side he has La Folie and Platée sing tuneful arias with long cadenzas in which the words are poorly (and hilariously) set or exaggerated, and there are all the Italianate special effects that many French critiqued: the sound of storms, winds, rain, frogs, owls, cuckoos, the braying of donkeys, slides, cries, and hoots. On the French side Rameau parodies the ridiculousness of the long divertissements that were completely extraneous to the plot: the chaconne is in the wrong spot (in the middle of an act and not at the end), and Platée is constantly sighing of boredom in the long-drawn-out marriage ceremony, as many a French operagoer must have in those long ballets. When La Folie steals Apollo’s lyre we might expect to hear a heavenly evocation in the orchestra of the god’s instrument. Instead, we hear the droning sound of a poor man’s instrument: the hurdy-gurdy. In Platée, Rameau’s sophisticated approach to musical parody takes on many forms.

You don’t need to know all the in-jokes to find Platée hilarious and wildly entertaining. Platée’s enduring brilliance comes from the fact that it is burlesque adorned in the finest trappings of tragédie en lyrique. The mounting horror of Platée’s cruel humiliation is the final twist of the knife and a stroke of operatic genius. The audience cannot help but fall in love with Platée’s vocal brilliance and vividness as the opera unfolds. So, as we witness her final moments, in which she is so horribly demeaned and mocked, we somehow feel partly responsible for witnessing the lead-up to such a cruel conclusion.

When considered along with all the other disguises and subversions in the piece, this extraordinary about-face makes Platée one of the greatest works of the Enlightenment. We are forced to
critique ourselves and our emotions and rationality, and as such Platée was considered to be one of Rameau’s greatest operatic achievements. The philosopher D’Alembert, who co-edited the Encyclopédie with Diderot, certainly thought so: “at first torn to bits with passion [by snobs], but later [in revival] almost all applauded with enthusiasm, Rameau gave us his opéra bouffon, Platée, his masterpiece and that of French music.”

We acknowledge the traditional owners of the land on which we work and perform:
the Gadigal people of the Eora nation –
the first storytellers and singers of songs.
We pay our respects to their elders, past, present and emerging.