This hugely successful opera, heard and admired by Mozart during his sojourn in France, began a new kind of French musical drama. Glorious orchestral colours and wickedly witty ensemble pieces reveal striking musical and dramatic ideas, embracing the daring new ideals of the Enlightenment, while laying bare the innermost thoughts and feelings of the characters in a way that would inspire Mozart’s partnership with his librettist da Ponte. Mistaken identity, mysterious strangers, true love, duels and a happy ending!

The success of this performance (the concert hall was packed) is testament to the vivacity of Australian music culture, which continues to lead the way in quality and novelty. This is a performance that should not be missed!

... such is the depth of Helyard’s insight into this kind of music, combined with an unflagging zeal for researching it [...] that one would be forgiven for thinking that we had here in Sydney a well-established tradition of performing 18th century French opera. [...] From the very first orchestral phrase, no pious delicacy, or any sense that we are entering uncharted waters, but instead a forthright, assured, highly expressive rhetorical vocabulary, extreme flexibility of phrasing, and an immediate sense that Helyard knows this style so well that it is completely natural.

The rich merchant Don Lopez does not want his young, widowed daughter Léonore to remarry. However, she is in love with the insanely jealous Don Alonze. Alonze's sister and Léonore's friend, Isabelle, is being pursued by her tutor who wants to marry her. The tutor is driven off by the French officer Florival and Isabelle takes refuge with Léonore. The jealous Alonze mistakes Isabelle her for a secret lover of Léonore (Isabelle is wearing a veil). Léonore is annoyed at the jealous Don Alonze.

Florival arrives at the house in search of the mysterious stranger he has saved, with whom he is now in love. The housekeeper Jacinte tells him the house belongs to Léonore and he mistakenly assumes she is the woman he is after. Alonze overhears Florival singing a serenade (Tandis que tout sommeille) to "Léonore" and storms off in another jealous rage. Florival and Alonze confront each other in the garden at night. They are both relieved to find they are not rivals when Alonze finally recognises his sister. Alonze has just come into an inheritance which allows him to marry Léonore, and Florival marries Isabelle.

One of the greatest comedies of the eighteenth century, L’Amant jaloux was an absolute triumph when it was first presented in Versailles in 1778 by the troupe of the Opéra Comique. Grétry was at that time a great favourite of the musically discerning Marie Antoinette, who appointed him as her personal director of music from 1774 onwards.

Grétry’s operas were highly influential on later Romantic composers and French operatic reform in general – he believed strongly in Italianate melody, privileged lyricism over harmonic artifice, and was a firm believer in an operatic style that responded faithfully to the libretto and its attendant visual and dramatic elements. He was highly attuned to irony and deployed thematic material in radically modern ways. One can hear characters in L’Amant jaloux, for instance, “quote” each other’s arias as a way of linking the narrative together and Grétry creates a remarkable unity by reusing and repeating themes in the orchestral accompaniment.

The great dramatic strength of L’Amant jaloux lies in its ensembles and musical diversity, but the heart of its mastery also lies in the touching human drama that is played out before us. Even in the nineteenth century, L’Amant jaloux was admired as the “greatest masterpiece of the opéra comique” of the eighteenth century (La Harpe) and Grétry himself spoke of it in his Memoires as one of his favourite works.

3] The Libretto and the Music

It is widely acknowledged that the harmonious combination of the text and the music made L'Amant jaloux the great success that is was. All the 18th century critics acknowledged L'Amant jaloux as a work to aspire to. Based on Susanna Centlivre’s The Wonder: a woman keeps a secret, the libretto has a complex plot conforming to classical ideals, but told with great skill and simplicity. The clever and insightful portrayals of the characters match perfectly with Grétry's score. Thomas Hales (or Thomas d'Hélé as he was known in France) masterfully uses comic effects that most favor the music.

The score is wonderful but the plot is no less remarkable. Although it belongs to a genre that is usually light and comic, L’Amant jaloux is one of the first great French character works. Farce and pathos meet to create the work. In the early 19th century many considered L’Amant jaloux as “the masterpiece of the opéra comique to date.”

The great dramatic strength of L’Amant jaloux chiefly lies in the ensembles, which are as numerous as the arias. The drama is expressed in the form of piquant melodies, dramatic breaks and unpredictable asymmetrical structures that always challenge the audience. The finale of the first act is one of the most outstanding pieces in the repertoire of the time, which Mozart – who passed through Paris in 1778 – was to remember for the finale of the second act of his Nozze di Figaro.

Grétry was born at Liège (in modern day Belgium) on 8 February 1741. His father was a poor musician and André became a choirboy at the church of Saint-Denis. In 1753 he began formal studies in music, but his interest wasn't fully captured until he attended the performances of a visiting Italian opera company when he immediately decided that he should study in Italy. Using the proceeds of a commission to write a Mass, Grétry went to Rome in March 1759 to study at the Collège de Liège. He lived there for five years, under the tutelage of Giovanni Battista Cassali. However Grétry himself said his proficiency in harmony and counterpoint was nothing greater than moderate! This clearly did not stop him from being the greatest French opera composer of his time.

His first great success was La vendemmiatrice, an Italian operetta, composed for the Aliberti theatre in Rome which proved popular. But it was studying one of Pierre-Alexandre Monsigny’s operas, lent to him by a secretary of the French embassy in Rome that decided Grétry to devote himself to French comic opera. On New Year's Day 1767 he left Rome, and after a short stay at Geneva (where he made the acquaintance of Voltaire and produced another operetta) went to France.

In Paris he lived in poverty and obscurity for two years until he was commissioned by the Swedish ambassador Count Gustaf Philip Creutz to set to music a libretto from Jean-François Marmontel. He managed this in less than six weeks, and at its performance in August 1768 met with great success. The name of the opera was Le Huron. Two other operas, Lucile and Le Tableau parlant soon followed, and Grétry's position as the leading composer of comic opera was safely established. He became a personal favourite of Marie Antoinette’s.

Altogether he composed some fifty operas. His best known works are Zémire et Azor and Richard Coeur-de-Lion the first produced in 1771, the second in 1784.

Grétry’s opera-ballet La caravane de Caire broke new ground with its exotic harp and triangle accompaniment. This work premiered at Fontainebleau in 1783 and remained in the French repertory for fifty years.

Grétry also made use of the mandolin in his compositions. It is thought that he first ran across the instrument while in Italy, and he used the instrument exquisitely in specially crafted arrangements. The serenade from L’Amant jaloux is a prime example of this.

During the Revolution Grétry lost much of his property, but the successive governments of France vied in favouring the composer, regardless of political differences. From the old court he received distinctions and rewards of all kinds; the republic made him an inspector of the conservatoire; Napoleon granted him the cross of the legion of honour and a pension.

Grétry died at the Hermitage in Montmorency, formerly the house of Rousseau.

Fifteen years after his death Grétry's heart was transferred to his birthplace, permission having been obtained after a protracted lawsuit. In 1842 a large bronze statue of the composer was set up at Liège. His heart remains in it, while his body is buried in Paris at the Père Lachaise Cemetary.

L'Amant jaloux was Grétry's favourite work. He spoke of it many times in his Memoirs, quoting it with pride as the best example of the musical theories developed during his career. Each aria has its own shape with much melodic richness. Grétry is particularly mindful of local color - Florival’s French nationality is reinforced by the minuet rhythm of his aria “Je me sens bien...,” whereas Spanish Lopez’s “Le mariage est une envie...” is built on a bass from Corelli’s Les Folies d’Espagne. Don Alonze's serenade “D’abord, amants soumis et doux...,” sung with a mandolin accompaniment remains one of the most successful coups de théâtre of 18th century opéra comique. It was the influence for a number of similar pieces in several contemporaneous works, from Mozart’s Don Giovanni to Rossini’s Il Barbiere di Siviglia.

Among the other arias in the score, that of Léonore – which seems to be motivated solely for virtuosity – was a glowing tribute to the talent of one of the greatest artists of the time, as underlined by Grétry himself:

“The bravura air that opens the second act is not the one d’Hèle and I had intended there; the former aria was but a demi-caractère such as ‘Si quelquefois tu sais ruser’ from L’Ami de la Maison, and it suited to the situation; but the desire to enable the finest voice ever formed by nature to shine, the desire to please the sweetest, most honest and least capricious actress, Lady Trial, made us consent to this dramatic contrast which the newspapers rightly criticized.”

First performed at court in 1778 by the troupe of the Opéra Comique, L'Amant jaloux had a very troubled rehearsal period. Yet, the premiere on November 20th turned out to be a complete success. The work was given five further performances within four months, and was a great favourite amongst the monarchs and courtiers at Versailles. Meanwhile, on 23 December 1778 L'Amant jaloux was produced at the Comédie-Italienne (as the Hôtel de Bourgogne theatre was then called as it was shared by both the Opéra Comique and the Italian Comedians). According to the press of the time, the court’s admiration was confirmed by the Parisian public.

Les Mémoires secrets (an anonymous newspaper of the time), which regularly eviscerated second-rate authors, reported that the work was “the greatest success for the poem and the music alike. The former [the poem] is in the genuine Spanish character, and it seems that the work is inspired by a comedy from that nation; while the latter [the music] is perfectly equal and worthy of the composer’s genius.” Following this tribute the audience’s curiosity was piqued, but they had to wait as one of the singers’ was ill, and the next performance was postponed for ten days. The second performance was an even greater triumph with Grétry and Hales receiving unanimous applause, which was rather unusual at the time.

It remained popular in Paris for the next fifty years or so. 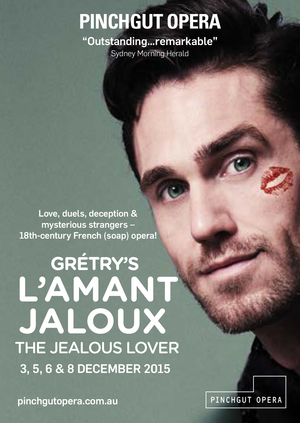