An Italian chimney sweep seduces the women of the household in which he works, in order to bargain for his future. Composed by Antonio Salieri, The Chimney Sweep is a sexy, fun comedy, filled with characters all shamelessly indulging their appetites.

Bribery and blackmail, anarchic domestic affairs, and venality reigns. But most of all, more wonderful music from the 18th century that you’ve probably never heard before. And for those whose knowledge of Salieri comes from the excellent film Amadeus, Pinchgut is compelled to report that much of the story in the film is nonsense. Mozart’s murderer? Pah! Pinchgut’s production of The Chimney Sweep restores Salieri’s good name, and his music!

It is literally a rare privilege to see a Salieri opera, and Pinchgut’s robust, enthusiastic production does great credit to the neglected composer’s charming little comedy. Strongly recommended, not just as a rarity or curio, but as a truly fun night at the opera, and one not to be missed.

Salieri was a master orchestrator, and Erin Helyard and the excellent Orchestra of the Antipodes immerse themselves to the hilt in his imaginative sound world. From the energetic overture to the folksy ländlers of the finale, this is a revelatory reading. Time and again the ear is tickled by moments of passing loveliness – flute, oboe and pizzicato strings in Volpino’s aria to the little birds; the surging strings in Wolf’s storm aria – the list could go on at considerable length. Helyard is not just a wiz at bringing out the felicitous colours, he’s also a terrific dramatist, urging band and singers on to bring out every musical gift that Salieri gives.

‘I can honestly say that I have not enjoyed an opera as much as I did tonight for a very long time indeed. The orchestra sounded wonderful, so beautifully nuanced and colourful, and I particularly enjoyed the knock-out singing of the female cast. Brilliant!’

"The Chimney Sweep was pure joy from start to finish. Everything about it was so finely crafted and perfectly realised that Salieri must have been cheering from whatever dimension he now inhabits.’

‘The quality of what you all produce is all so very impressive, the fine detailing appreciated I know by a grateful audience of opera lovers. It was a great cast, great crew and Erin and that orchestra - stunning!’

From the March newsletter:

In July we will be staging Antonio Salieri’s The Chimney Sweep . This is new territory for us as it’s an opera in the singspiel tradition. Literally ‘sing-play’, the singspiel was a favourite genre of Emperor Joseph II. Characterised by spoken dialogue alternating with lots of music (in the form of ensembles, songs, ballads, and arias), singspiels often featured hilarious romantic plots, and comically exaggerated characterisations of good and evil.

Emperor Joseph was initiating many social reforms in favour of more social equality, dismantling the class system, and opening gardens and parks to a wider public. The singspiel sat happily within these enlightened reforms, giving people of all classes the chance to see themselves on stage. Emperor ‘Jo’ [as I like to think of him! – Ed.] was also busy closing down the big fancy-pants Italian opera houses and French theatres in favour of promoting the German language more widely.

The Chimney Sweep is a sexy, fun, ‘upstairs- downstairs’ comedy, filled with characters all shamelessly indulging their appetites. (We’ll tell you more about the plot in the next newsletter.)

Salieri was Italian-born but lived most of his life in Vienna. He was a favourite composer of Emperor Joseph who asked Salieri to compose in the vernacular German rather than his native Italian as part of his social reforms.

The Chimney Sweep is a social drama or ‘master/servant comedy’ very much reflecting the changes in society at the time. Co-artistic director Erin Helyard is busy researching the manuscript and background to our Salieri production and says:
‘I’d been reading about this opera in musicological articles and histories for quite a while, and pretty quickly realised its historical and musical importance. This is a new and interesting departure for Pinchgut from our regular productions because it’s a singspiel . Much of the drama is spoken rather than sung as recitative.’

Salieri was very attached to his Italian opera roots so The Chimney Sweep contains some arias in Italian. We asked Erin how he planned to work with the language issues of this singspiel :
‘We made the decision to perform the whole thing in the vernacular (ie. English), which is basically what Joseph II wanted to do in the first place (i.e. turn Italian opera into the vernacular, German). But there will be sprinklings of Italian and German through the show!’.

And of the music itself ? Erin says, “Right now I’m editing the score from a facsimile of Salieri’s manuscript. He was a very precise composer in his notation and I’m learning a lot about performance practice!

‘To the casual listener, Salieri sounds like Mozart – or more accurately, Mozart sounds like Salieri. [Salieri came first! – Ed.] He was the foremost Italian composer in Vienna at the time. But as the greatest student and protégé of Gluck, at his most serious he certainly sounds like his teacher.’ In a beautiful piece of symmetrical operatic planning, we’ll all be able to hear the fine work of Salieri’s teacher Gluck in our second production for the year – Iphigénie en Tauride!

The Austrian physician Leopold von Auenbrugger (1722-1809) earned a firm footnote in the history of medicine by inventing chest percussion as a diagnostic technique, a technique that he had learnt when testing the level of wine casks in his father's hotel cellar. During his years of hospital-based research in Vienna, Auenbrugger validated his clinical observations on the use of diagnostic percussion, first, by comparing his clinical assessments with post-mortem findings and, second, by injecting fluid into the pleural cavity of cadavers thus showing that percussion could accurately define the physical limits of any fluid present.

For a pioneering auscultationist, Auenbrugger must have had a good ear and sense of pitch, attributes that no doubt enhanced his love and involvement in music. Indeed, he wrote the libretto to Antonio Salieri’s three-act opera, The Chimney Sweep (‘Der Rauchfangkehrer’), first performed in the Burgtheater in Vienna in April 1781. This opera, long-neglected but highly popular at the time, is soon to be resurrected and performed in Sydney for the first time by Pinchgut Opera.

In 1773 Auenbrugger and his two musically talented pianist daughters, Franziska and Mariane, visited Vienna where they renewed contact with the Mozarts, father and son; Wolfgang was now 17 years old. Auenbrugger’s daughters were keyboard pupils of Joseph Haydn, comfortably established with the family and court of Hungarian nobility in Esterhazy, Austria. Haydn composed the famous six Auenbrugger keyboard Sonatas for the sisters in 1780, one year before the premiere of Salieri’s opera.

When we settled on The Chimney Sweep as our first production this year, we knew a great key to unlocking the appeal of this work would be in finding just the right person for the principal role of Volpino. We’re delighted to say we found him, in young Australian tenor, Stuart Haycock!

The role of Volpino calls for a charming, charismatic, lovable rogue. Though his heart is true, Volpino has one goal in mind, and nothing’s going to stop him getting the girl of his dreams – look out all who stand in his path! The role is also fiendish in parts, and requires a tenor of great strength and flexibility.

Antony Walker, our co-artistic director, first heard Stuart sing at the English National Opera some years ago when Stuart was covering various roles in Offenbach’s Tales of Hoffman . More recently, Stuart also sang the role of Demo in the English Touring Opera’s production of Giasone – what a wonderful coincidence!

Based in London, Stuart spared a few moments to answer some questions for us about his upcoming appearances with Pinchgut:

From Stuart:
I haven't sung singspiel before. The main difference will be the emphasis on spoken dialogue. It will be both challenging and interesting to work on this, especially with the comic elements that The Chimney Sweep provides!

It’s been about six years or so since I've sung in Australia so it's definitely something to look forward to. It’ll be lovely to sing for family and friends who perhaps haven't been able to see what I've been up to whilst overseas. Also, to see some extra familiar faces in the audience will certainly be comforting and most welcome.

This will be my first experience with singing Salieri so it's a great opportunity to learn about a composer whose works for the stage aren't often seen. My initial thoughts on Salieri are naturally based on the film Amadeus which of course is a highly fictionalized account of his relationship with Mozart, and the sentiment is that he has been largely overlooked and overshadowed as a composer. It's exciting to work on something different and I'm looking forward to discovering him through The Chimney Sweep. 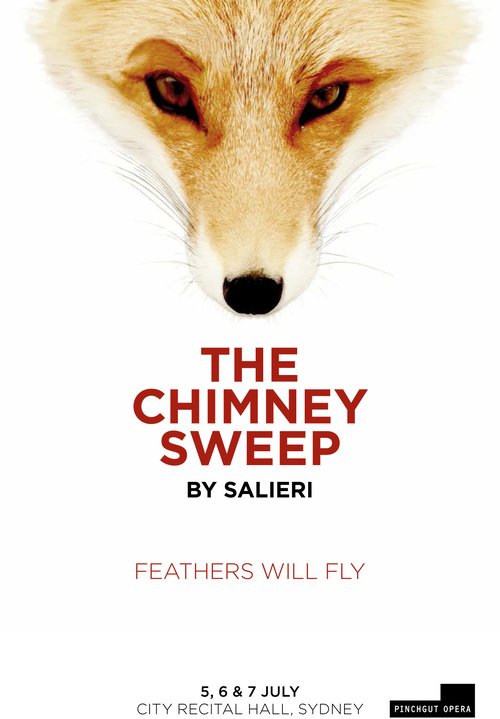 Miss Hawke (Janet Todd) attempts to seduce Volpino (Stuart Haycock) with the beauty of her singing, not knowing that he is doing the same. She makes a number of mistakes at the beginning so that he can correct her!

To be the master of your fate

In the quartet at the end of Act 2 Lisel (Alexandra Oomens) and Volpino (Stuart Haycock) try to persuade Wolf (Christopher Saunders) and Bear (David Woloszko) to have the courage of their convictions. Wolf and Bear are not convinced that Volpino’s cunning plan and deception will work. Volpino and Lisel must persuade them to go for it.

Bear (David Woloszko) is very nervous about the amount of money he will have to outlay in order for Volpino’s plan to succeed. He fears that he is being tricked and that there is no way out. He decides that the only course of action is to be bold.